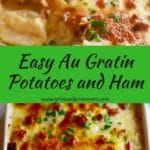 The Best and Easiest Au Gratin Potatoes and Ham Recipe is a classic entrée. Made with leftover ham it’s a staple on many holiday tables. It also solves the age-old question of what to do with all that leftover ham! 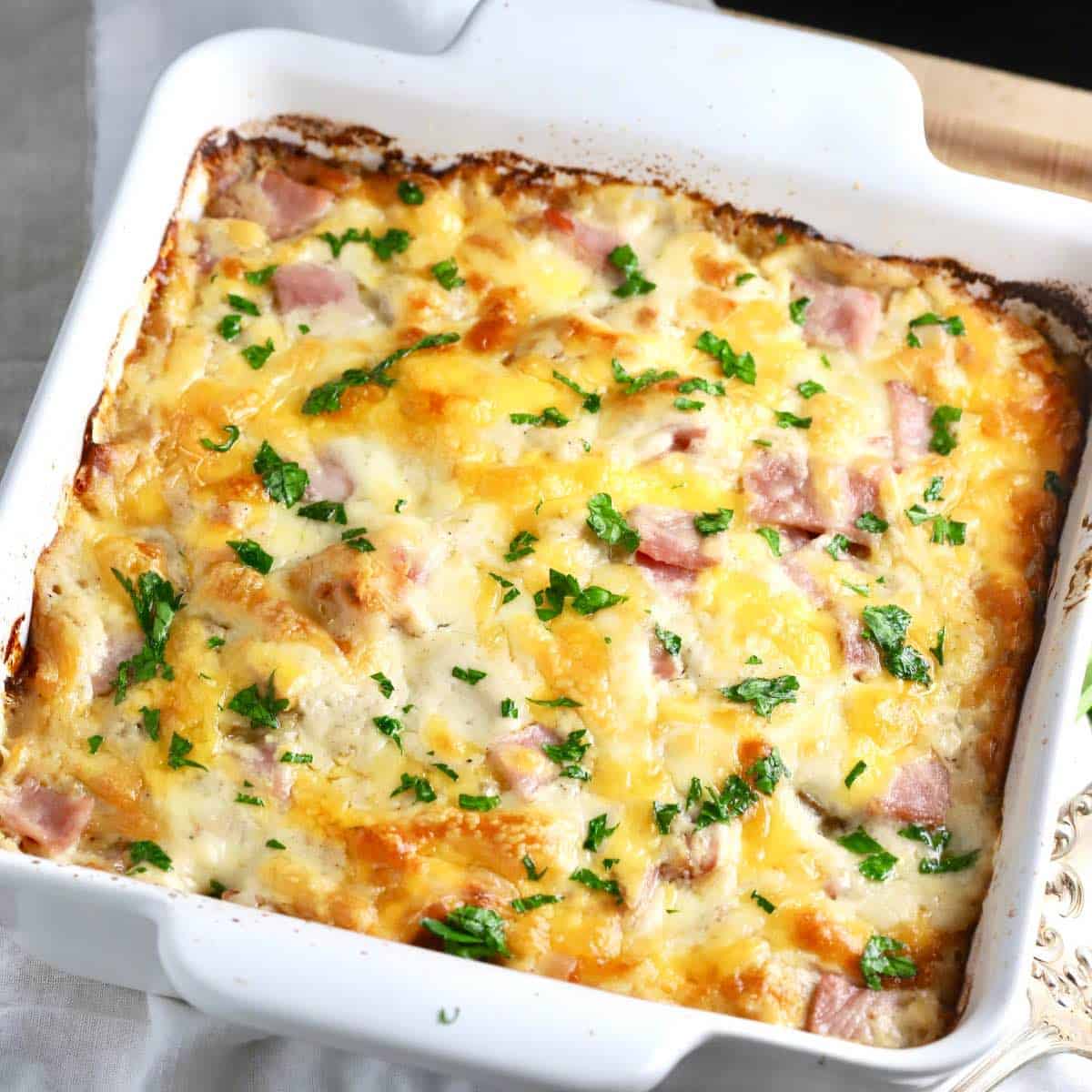 I’m excited to share this cheesy dish of deliciousness, Easy Au Gratin Potatoes and Ham. This recipe is not only a family favorite, but it’s also fancy enough to serve guests. When my children were young, this was one of their favorite dinners, and I made it often. And, I still do, especially around the holidays when we are likely to have leftover ham in the house.

What to do with leftover ham?

I love ham, and I love to serve it because then I have leftover ham. Easy Au Gratin Potatoes and Ham is my favorite way to use up my leftover ham. Plus, I always cut up leftover ham chunks and freeze them to use as a flavoring for collard and turnip greens and peas.

I confessed in another post that I never met a mashed potato recipe I didn’t like.  Well, the reality is, I never met a potato dish I didn’t like, and this recipe for au gratin potatoes is no exception. This scrumptious Easy Au Gratin Potatoes and Ham casserole is also known as cheesy scalloped potatoes and ham and is pure comfort food nirvana!  I guarantee it will quickly become one of your family’s favorites too!

What’s the difference in scalloped potatoes and au gratin potatoes?

How to Make Au Gratin Potatoes and Ham

To get started, gather your ingredients which include: butter, onion, flour, milk, pepper, potatoes, ham, Monterey Jack and Cheddar cheeses, and parsley for garnish. 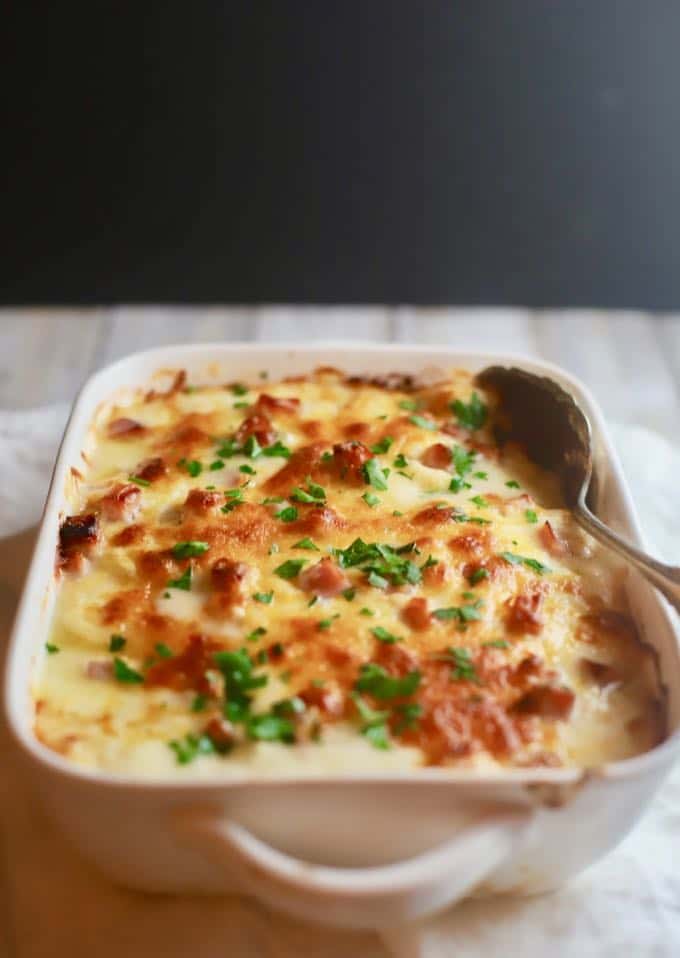 Add butter and finely minced onions to a large skillet over medium-low heat and saute about 10 minutes until the onions are soft and translucent.

How to slice the potatoes:

Wash and scrub the potatoes. Then use a mandolin or your food processor and slice the potatoes as thinly and as uniformly as possible. I usually leave the skins on. The thinner the potato slice, the quicker this casserole cooks. You can also use a sharp knife to slice your potatoes.

Cut up the ham into cubes.

Once the onions are done, sprinkle flour over them and whisk to combine. I use Julia Child’s rule of thumb here for the white sauce which is 1 1/2 Tbsp of flour for every 1 cup of milk or liquid. Continue cooking the onion and flour mixture until the flour is golden brown, about 2-3 minutes.

Slowly add the milk and continue whisking to prevent lumps. Cook until the sauce has thickened which usually only takes a few minutes. Add pepper, mix well and remove from the heat. You can add a pinch of salt at this point, but with the cheese and ham, this dish is already pretty salty. 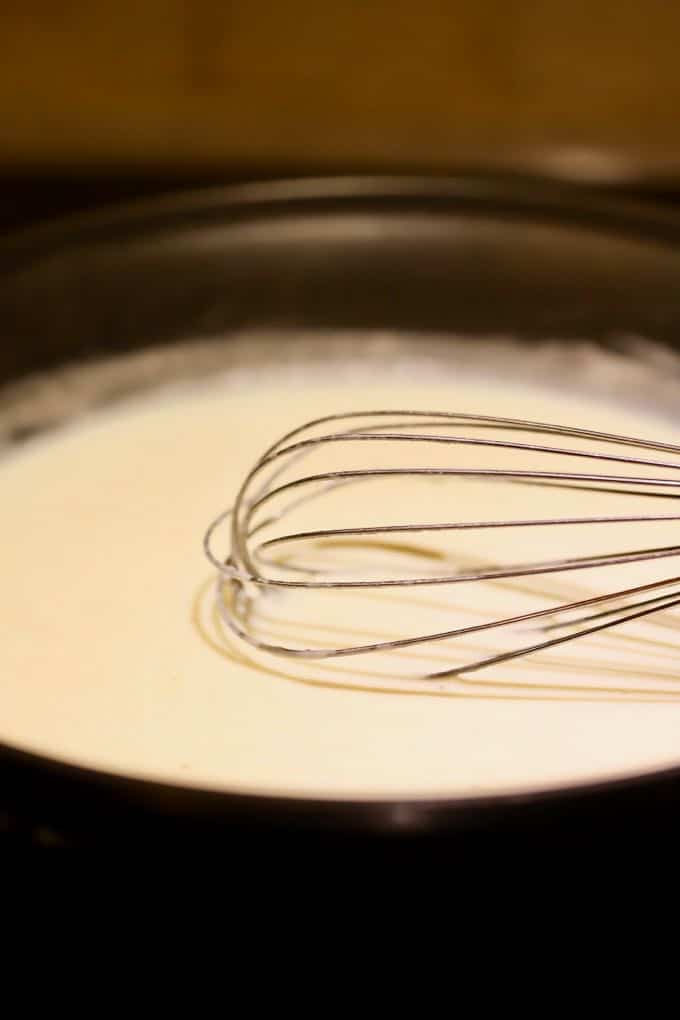 How to assemble Au Gratin Potatoes with Ham:

Spray a medium-size casserole dish with non-stick cooking spray or butter the dish. Add half of the sliced potatoes, then half of the cubed ham, and about half of both kinds of grated cheese. 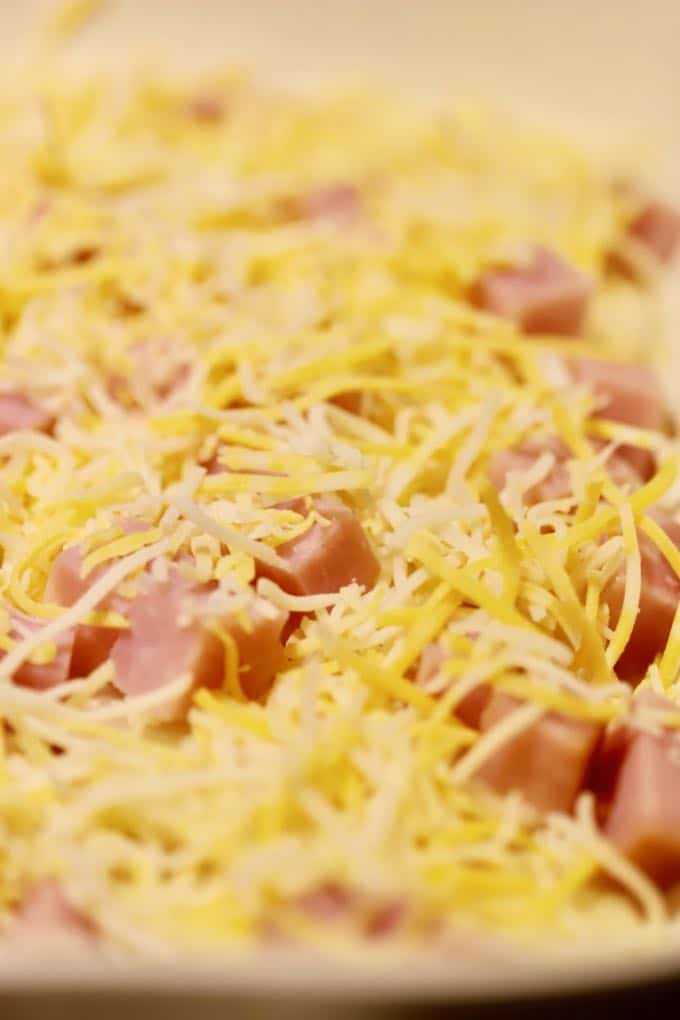 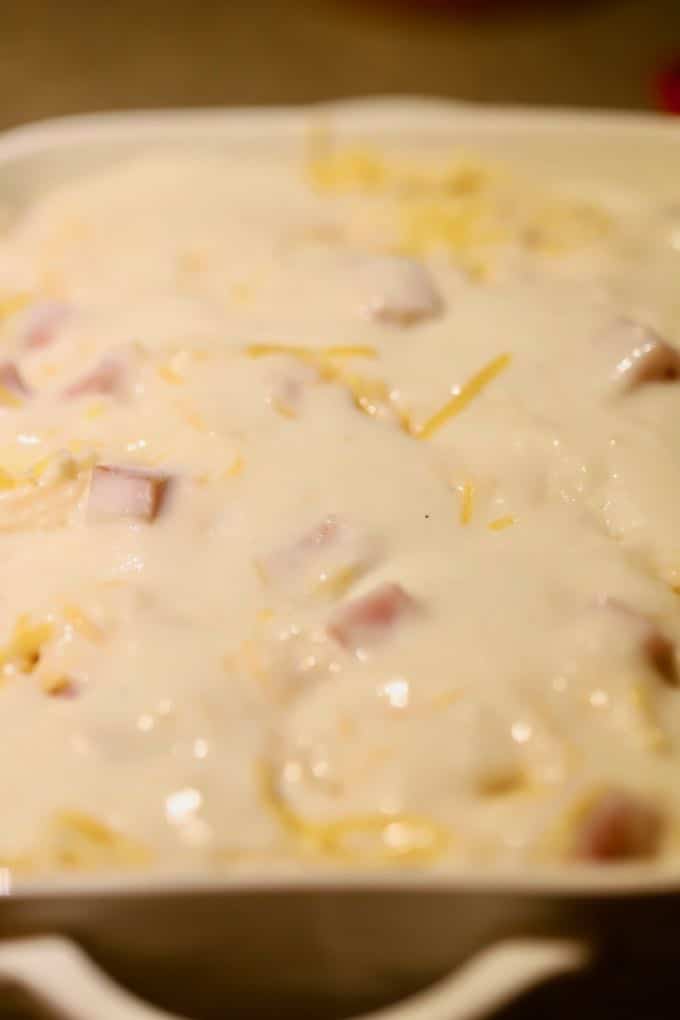 How long to cook Au Gratin Potatoes and Ham:

Cover the baking dish tightly with aluminum foil and bake at 350 degrees for 40-60 minutes. How long it takes depends on the thickness of the potato slices.

Remove the foil and test to see if your potatoes are done, by piercing them with a fork. If not done, continue cooking for another 10 minutes or so. Once the potatoes are fork tender, remove the foil completely and bake for another 20-30 minutes, or until the sauce is bubbling and the cheese is golden brown.

You can also add leftover ham to quiches, frittatas, and breakfast casseroles, soups, chowders and stews, and of don’t forget the classics, ham and cheese sandwiches, Cuban sandwiches, or ham club sandwichs. 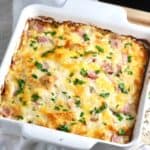 This site uses Akismet to reduce spam. Learn how your comment data is processed.

Hello, I'm Sharon Rigsby, blogger, recipe developer and photographer for Grits and Pinecones®. I’m all about creating delicious recipes with a Southern flair that are quick, easy and PERFECT to share with family and friends. Nothing fussy or complicated, just “go-to” dishes for the everyday home cook.
Besides scrumptious, tested, and perfected recipes on my blog, you will also find expert cooking tips and tricks, step-by-step tutorials, and photos detailing the process for each recipe! Read More…

Enter your email address here to subscribe to Grits and Pinecones® and receive notifications of new recipes by email.

Labor Day signals the end of summer. Plan your menu now for the ultimate cookout! 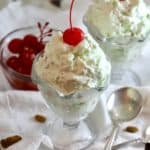 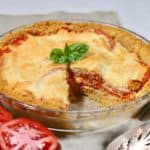 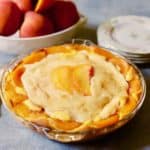 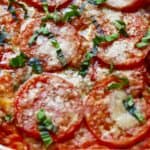 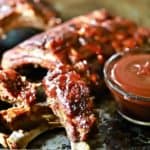 Check out these iconic and top-rated Southern recipes. 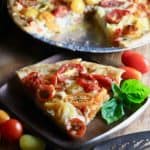 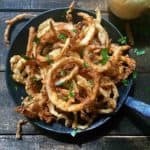 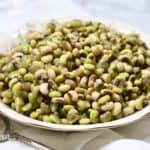 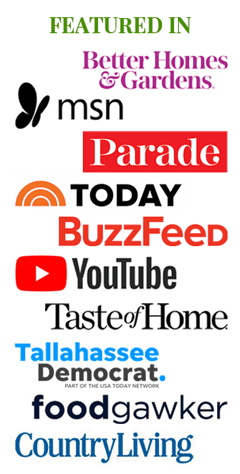